Generated with Stable Diffusion using the prompt: City in the heart of mountains; upscaled using chaiNNer

Changing names should be something easy, I guess the french state didn't get the memo.

Just to set some grounds, where I reside (but not a citizen yet), in Finland, I did the name change request around 2021/07/14 and obtained a positive response on 2021/07/30 (so overall less than a month). It also took more or less a month to get a foreigner ID for Finland (not for travel).

So, for France, our journey starts in May 2021, I just moved in Finland and decided to finally change my name after all those years. So I started looking what I needed and the document asked are quite hefty:

To top it off, it is not possible to send the file via email (at least at this embassy) and a physical appointment is required, so all the files had to be printed.

After months of waiting, I finally gather all the documents, including that family attestation thing and time comes to take an appointment. In the end, the appointment will take place on 2021/06/11 at 10:50 EEST.

During this appointment, I give all the required files, copy of old ID and such. The person whom I am talking to tells me the delay is around three months which seems incredibly fast for the french state.

So I wait a bit and one day, that person contacts me again asking for more documents, one being a proof of where I live (something like a phone or electricity bill can do) which I gave. Then silence.

I waited until around january 2022 where I tried re-contacting the person but nothing. No response.

I then filed a complain at the Défenseur des Droits (or Defender of Righs when translated), the request took some weeks to get through but finally ended up talking to M. Nicoloso Patrick which started to push my case to the embassy and, had been so far, the most helpful person I encountered in this story.

After one or two months of waiting for documents and requests to be thrown around, the embassy finally broke silence, after multiple months, asking me for a last document from a family member (which I got and sent).

Then the communication became cryptic again. I recently tried asking them where was my file at and still the same answer:

Then sent one saying I wanted a valid ID before start of 2023, because of travels within the EU and got this response: 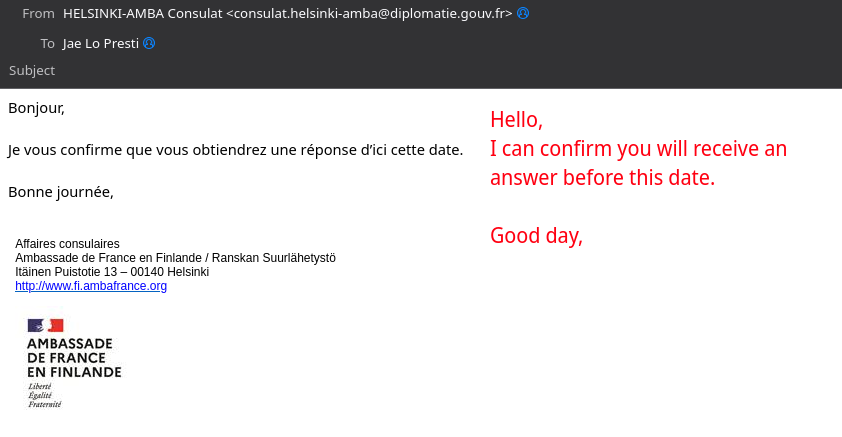 I then asked to know if I would have a guaranteed response at least in December but no answer as of yet.

I will update this post with new screenshots when they come. Only non-publicly available names and addresses are blanked. I'm just fed up with waiting.

As of today, the saga still goes on and no definitive answer which makes it hard to do anything, let alone just travel, change names on state registers or even have a valid passport.

I'll keep you people updated and I'll see you next time!

After months, the embassy finally responded.
They won't say what the answer is via e-mail and will sent it via post on 2022/09/30. 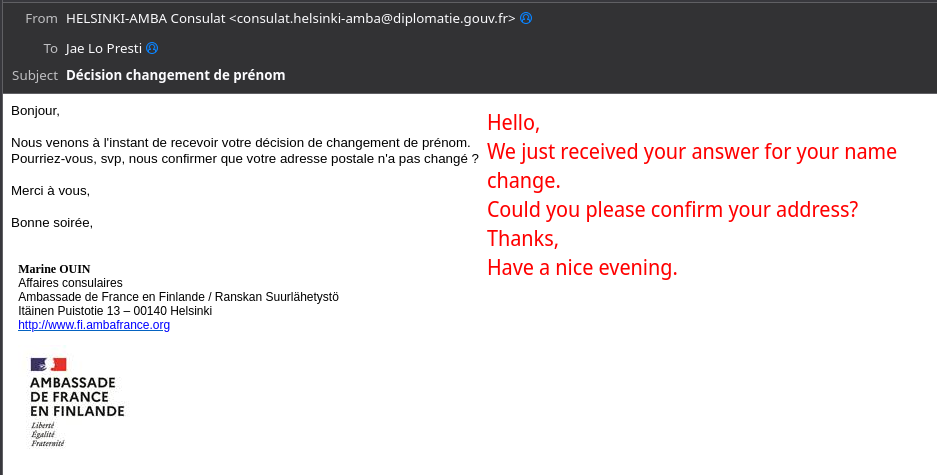